God of all creation, your goodness and glory shine forth through everything you have made. Through the light of faith, help us to see and treat this world as our common home, not as a resource to dominate and exploit.

The Intergovernmental Panel on Climate Change, in its 9 August 2021 report, told us that the world was receiving a wakeup call; that we were on the verge of complete destruction. The rising sea temperatures were irreversible and drastic cutting of emissions might just help in the stabilisation of global temperatures. The report concluded that there was no shadow of doubt human beings were responsible for the rise in these temperatures. We are currently living in an overheating world as evidenced in the heat dome over Canada that claimed 570 lives in one week, and the crisis is only going to deepen unless we can maintain the global temperatures at 1.5 degrees Celsius! If the temperatures reach 3°C, a very real possibility, then the world will experience a massive catastrophe. To achieve the 1.5 degrees, all countries – and not just the major polluters – must attain net zero by 2150! Therefore, the next ten years must be a time of change if we stand any hope of safeguarding the future inheritance of our children and their children’s children. We hope and pray that the UN 26th, Conference of Parties (COP26) in Glasgow in November will make new and binding climate pledges in light of the current emergency.

Unless you have just arrived from outer space, then you will know that in the past few months, people around the world have struggled with extreme and erratic weather patterns such as heatwaves, wildfires, drought, coastal erosion, permafrost thawing and severe flooding. We are experiencing what experts have warned about for many years: climate change. Although, if you ask me, it is no longer a change, it is an emergency! And this emergency is undermining our ability to live where and how we have chosen.

This global ecological crisis calls us to rethink the way we understand God and God’s love for us and for the whole creation. How does God feel when innocent people suffer loss due to natural calamities? How does God feel when we exploit nature to satisfy our greed? What is our responsibility as God’s children?

First, as we heard in John’s gospel, God created the world and without him nothing exists. The text continues to tell us that God so loved what he created that he was willing to sacrifice his own son to redeem what he had created; nature included. This is clearer in the creation account in Genesis, where it says, God saw all that he had made, and it was very good. The point here is that God created everything in the universe and it is all good.

This understanding of the place in which the Church finds itself crucially shapes our theological thinking about climate change. First, and most important, followers of Christ must hope in these days and not despair. If we affirm the goodness of God’s creation, God’s incarnation in Jesus Christ, and God’s promise of redemption, we cannot despair of what will be. Why? Because our faith and hope is in God’s promises. As God-created creatures, we do not have the power ultimately to frustrate God’s purposes. In these days of waiting for Christ’s return, we are part of a creation groaning in labour pains for the new creation to come. These are testing times, but faithfulness means not weakening our grip on the hope that has been set before us. I absolutely refuse to envisage a future in which God has abandoned the project of creation and redemption. A future in which climate change destroys all that God has established or a future in which human irresponsibility overwhelms God’s ability to bring redemption to creation.

As I mentioned, God created everything including us with a purpose. Often, though, human beings disobey God by not fulfilling their responsibility, but nature faithfully and patiently does her work. I will give you an example, the trees around us produce oxygen and take in the CO2 we produce! This tell us that all creation, including human beings, are interdependent on each other. It is God’s will that all his creatures, which he calls good, must live to fulfil their purpose of existence and they do so by depending on each other.

But the natural world also suffers immensely today, due to human greed and heartless destruction of natural resources. And when nature suffers, its ability to sustain human beings will diminish and we will begin to experience chaos. This is what we are witnessing right across the globe. Floods in mainland Europe and Asia have killed several hundred people this summer. Fires have devastated countries from Africa, Europe, Australia and they are still burning in America! Shortage of water and rain in Africa is displacing thousands of people resulting in conflict and migration. Does God care about this? Of course he cares! We have already seen in the creation narrative that God calls everything he created good. Based on this, we can say that God suffers with his creation because he loves them so much.

As custodians of God’s creation, it is our duty to respond to the ecological crisis at every possible level. If serving God is doing his will, then responding to ecological crises is part of doing God’s will. We read in Isaiah 58 about rebuilding. Two things to note from this passage. First, Isaiah’s call was to rebuild, to repair and to restore. But why rebuild, that which is already ruined? Because God is concerned with the well-being of our world as a whole. He deeply cares for what we have broken and ruined in the process of economic development. Second, what is to be rebuilt, restored or repaired? Isaiah tells us that it is the foundation of a new generation, the breach and the streets that need to be repaired. In our case, it is the environment, the land, rivers, the seas and the polluted air. In addition, the word ‘repair’ means making something new out of what is there already. In other words, what God called good at the time of creation must be restored to its state.

Finally, being called the children of God by his love and grace, we should respond to God’s call for action. Tackling climate change requires change at every level of society and particularly in the systems and institutions of governance and leadership. As individuals, issues of climate change can feel remote to our own lives and leave us feeling disempowered. But we are not powerless and we must respond. We must play our part in cutting emissions to help stabilise the global temperatures. So, here is what I am pleading with you to do!

We are the last generation that can stop the most devastating effects of climate change. Therefore, we call governments and businesses to the reality of climate emergency and hold them accountable for creating and implementing tougher laws to protect earth. We may not be able to change the past, but we can influence the resulting future. Play your part and have faith in God’s ability to play his part in renewing his creation. 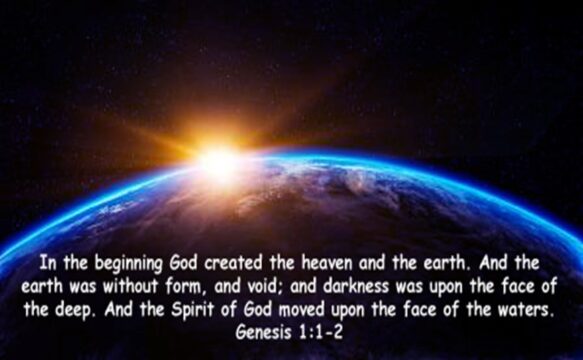